Joseph Swan: engraver, publisher and supporter of the arts

One of my more respectable ancestors is Joseph Swan. He was born 11 November 1796 in Manchester England to Thomas Swan and Janet Russell. Not much is known about his parents or whether he had any siblings - though there is one possibility.

This outline of his life demonstrates his connections with and support for the arts in Glasgow and his contribution to the art of engraving in particular.

He started his career in what had become his hometown of Edinburgh as an apprentice to engraver John Beugo and worked with other engravers. In August 1817 he married Margaret Thomson in Edinburgh before setting off to Glasgow. He took over the engraving business established by Charles Dearie, who died 28 November 1818.

Swan was one of a number of engravers and printers in Glasgow whose business encompassed pictures, portraits, maps, bookplates, plans invoices, bills, bank notes, and silver work. One of his commissions was to illustrate rare plants in the collection of the Royal Botanic Institute of Glasgow.

In 1836 Swan was one of the first to apply steam to the lithographic printing process. He employed staff who specialised in a particular area such as pictures, letter and seal engraving. They included Robert Charles Bell who, like Swan, had worked with John Beugo in Edinburgh and Thomas Annan, later known for his photographic work.

Swan's reputation was established by his engraved illustrations of Scottish towns and landscapes which were based on pictures by contemporary Scottish artists such as John Fleming, John Knox,  Andrew Donaldson, James Stewart and William Brown.

To ensure the commercial success of such a project, subscribers were required to make payments in advance of publication to ensure that the work could proceed. Subscribers for the Views of Glasgow included the Duchess of Montrose, the Lord Provost of Glasgow and Archibald McLellan, a founder of the civic art collection. The engravings were made from pictures produced by Greenock based John Fleming, Glasgow’s John Knox and Swan himself. The thirty-three plates include views of the city from different vantage points, the leading thoroughfares, buildings, and districts. Contemporary newspapers praised the work both for its choice of subjects and the quality of workmanship.

Following the success of the Select Views of Glasgow, Swan published part one of the Select Views on the River Clyde in February 1828. The engravings for the series were taken from pictures by John Fleming and Andrew Donaldson. They were larger than the Glasgow set and the price rose accordingly. By February 1830 the series was complete and included views of country houses such as Blythswood, Carstairs, Erskine and Hamilton Place plus Helensburgh, Greenock, Rothesay, and Campbelltown. 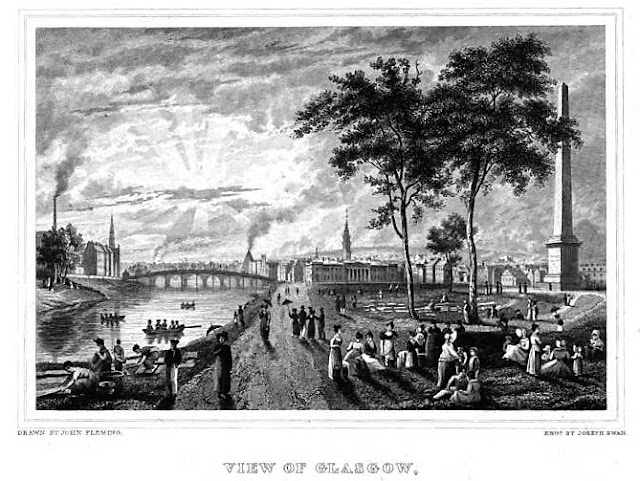 Then followed Views of the lakes of Scotland, the first part of which was published in 1830. Swan was keen to point out to potential subscribers and purchasers that the work was of national importance as it was the first to group together Highland and Lowland lochs and included many of the lesser known ones. He attracted well over 1000 subscribers from throughout Britain. All the engravings were based on pictures by John Fleming and the text was by Leighton with an introduction by Professor Wilson. From 1832 to 1836 Swan’s entry in the Post Office Directory shows him as ‘engraver and publisher of the Lakes of Scotland’.

Stewart provided the artwork for the History of the County of Fyfe (1840), Sir William Hooker’s Perthshire Illustrated (1843), also has Swan’s engravings after Stewart, William Brown, Andrew Donaldson and D. MacKenzie. Swan’s engravings appear in further works including Strathclutha; or the Beauties of Clyde (1839), which combines views from the Glasgow and Clyde series; The Topographical, Statistical and Historical Gazetteer of Scotland (1845); and the new edition of James Browne’s, A History of the Highlands and of the Highland Clans.

Joseph Swan was a committee member and for some time treasurer of the Glasgow Mechanics’ Institution which was founded in 1832. From January 1824, the institution published a very successful magazine which included many of his engravings such as portraits of James Watt and John Anderson, founder of Anderson’s institution, and the numerous mechanical inventions and improvements discussed in the text.

A key figure in Glasgow’s art world, Swan co-founded the Glasgow Dilettanti Society in 1825 to promote interest in the fine arts among the city’s artists, art collectors and connoisseurs. He was an honorary member of the West of Scotland Academy of the Fine Arts, founded in 1841, to which his firms supplied printed material. In the same year, he was on the management committee and treasurer of the newly founded Glasgow and West of Scotland Association for the Promotion of the Fine Arts, an art union.

Swan operated his business from a number of locations through his career. These included different addresses in the Trongate between 1818 and 1841 when he relocated to St Vincent Street, adjacent to the Western Club. Other premises were at Exchange Square, Bothwell Street, Buchannan Street, and Parliamentary Road where the renowned Swan’s Universal Copy Books were manufactured for use in schools worldwide. He was listed in the Post Office Directory as an engraver and lithographer into the 1860s.

He was buried at the Glasgow Necropolis where his monument stands. The monument is a valuable record of his family including nine of his children who predeceased him. It does not include the names of four daughters who survived him.

The marriages of three of his daughters are recorded in the Glasgow Herald and are worth mentioning because the sisters and their descendants kept in close touch.

It’s interesting to note that these sisters were married on the same day in their home by Rev. Thomas Swan who had travelled from Birmingham for the event. Rev. Swan was born in 1795 of Scottish parents, resident in Manchester. He returned with his family to Edinburgh when he was six years old. It is possible he was a close relative of Joseph, possibly a brother. He studied at the Bristol Baptist Academy from 1821–24, ahead of missionary service in India. This reflected Joseph's support for overseas missions, something which was a strong interest of his daughter Margaret and her daughter and son-in-law Claud Bald.

Again, it sounds like the minister may be a relative. At present, all I know is that he was based in Edinburgh and was a member of the dissenting churches. 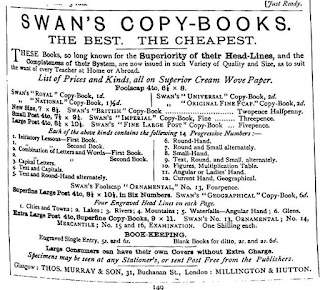 Comments are welcome below.

Posted by Leon J Lyell at 16:55
Email ThisBlogThis!Share to TwitterShare to FacebookShare to Pinterest

Leon J Lyell
Providing editing services in all areas and research for historical projects. Tell me what you'd like. Email: leonjlyell@gmail.com